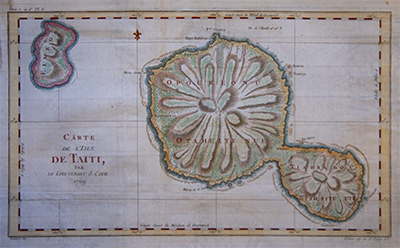 Original engraving from Cook's Voyage showing one of the earliest maps of the Tahiti. The map shows the volcanic mountains and coral reefs around the islands.

Cook arrived at Otaheite 13 April 1769, to measure the transit of Venus across the sun’s sphere which was to take place on 3 June, an event which occurred only twice within eight years and once every 120 years.

By Jacques Nicolas Bellin for "Histoire Generale Des Voyages” and printed between 1758 -1775.