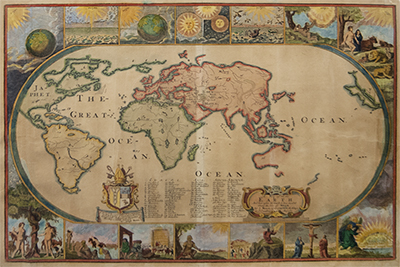 A World Map (A Map of all the Earth and how after the Flood it was Devided among the Sons of Noah), Moxon, London, circa 1685.

Second state of this very uncommon, oval world map. The map is surrounded by vignettes illustrating the Creation, the Garden of Eden and several Biblical scenes, including Moses receiving the Ten Commandments and the Crucifixion of Christ. The map itself includes California as an island, and partial coastlines for Japan, Australia and New Zealand. Eden and the land of Nod are located by the Euphrates River. Numbers throughout the map are keyed to a listing of various countries. Two cartouches further decorate the map, including a dedication to Gilbert Sheldon, Archbishop of Cantenbury.

Joseph Moxon (1627 - 1691), hydrographer to Charles II, was an English printer of mathematical books and maps, a maker of globes and mathematical instruments, and mathematical lexigrapher. He produced the first English language dictionary devoted to mathematics. In November 1678 he became the first tradesman to be elected as a Fellow of the Royal Society.