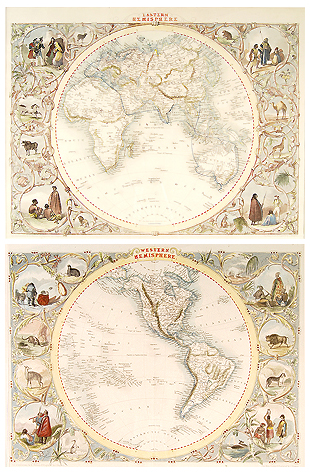 The World in Hemispheres by John Tallis with the cartography of John Rapkin, and illustrations by H.Warren and J.Rogers. These antique maps are steel engravings in hand colour, published circa 1851.

The borders surrounding the maps are filled with entwined vines containing many images of the people and animals of the world.

The Eastern Hemisphere has an interesting trail marked in blue to show the mail route, from London to as far as Hobart, Bombay and Hong Kong.

John Tallis (1815 – 1876) English cartographic publisher. His company John Tallis and Co, was based in London, and later expanded to Edinburgh, Dublin and New York. His most famous work was An Illustrated Atlas of the World. He worked closely with John Rapkin and incorporated vignettes commissioned from various artists.

Sold as a pair