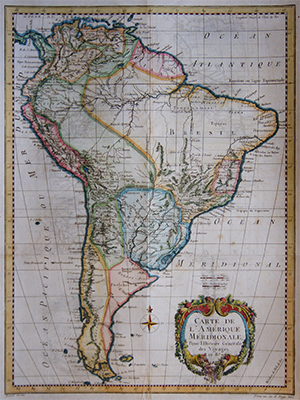 This map was completed for "Histoire Generale Des Voyages” and printed between 1758 -1775.

Belin (1703 - 1772), a French mapmaker, was named the hydrographer (chief cartographer) to the French Navy, and later, the Official Hydrographer to the French King. During his term as Official Hydrographer, the Depot was the single most active center for the production of sea charts and maps, including a large folio format sea-chart of France, the Neptune Francois. He also produced a number of sea-atlases of the world, e.g., the Atlas Maritime and the Hydrographie Francaise. These gained fame, distinction, and respect all over Europe and were republished throughout the 18th and even in the succeeding century.